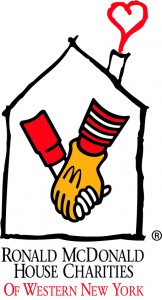 We ran our first Ronald MacDonald House 5K last night, here’s a recap of the night.

I had been told by running friends that this was one of the better runs of the season, if you like a flat city run and a good after party. Who doesn’t?? 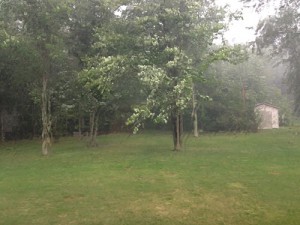 We were concerned heading out that the run might be cancelled. We had a ferocious storm cell pass through Western New York with 10 degree drop in temp, thunder, lightning, pouring rain and hail. An all-out summer storm. Changed my running clothes plan with the possibility of a (very) wet run. A fan of running in the rain, this rain wasn’t something to mess with. Thankfully, the weather radar showed clear for the city. We headed out, fingers crossed.

This was a larger run, even leaving early parking took a couple minutes to figure out. Private schools in the area afforded us great parking for the run. We do need to work on arriving earlier. We did packet pickup before the run and that worked out fine.

The run route is city street that are closed off for us. We started on West Ferry to Elmwood to Bryant to Richmond around  a couple circles to Bidwell Pkwy(where the yoga class cheered us on) to Chapin Pkwy to Delaware back to West Ferry and the Ronald MacDonald house.

The run had a surprisingly smooth start. We definitely experienced the initial half mile congestion, but it was smooth. We have a fantastic running community, as witnessed by this start.

There was a major glitch… something no one could have anticipated… a fire in an apartment building around the run route. Fire, police and emergency vehicles had some troubles getting to the fire. Thankfully there were no human injuries. It may cause some planning with emergency personnel for next year. There were a couple criticisms on the Buffalo News website about providing notice to area residents and businesses. Along the route I saw signs notifying of the date and time of the race. Maybe there could have been more, a topic for further discussion. In my humble opinion, emergency services should be aware of  events and have a plan.

The night was 70-something degrees and a bit humid. It’s running in July in Buffalo, enough said. The crowd at the finish were motivating! So many people (lots of families) cheering us to finish, they even called our names as we finished. A nice touch.

The after party is one of the better in Buffalo. A full dinner with bananas, yogurt, cookies, apple slices, chips/Doritos/etc, hamburger/cheeseburger, lots of water/sports drink/pop and various beers. We enjoyed the Scott Celani Band, who played into the night.

The best part of this race is that it supported the local Ronald MacDonald House. We look forward to next year!

I'm a 50-something wife, mom and business woman. My planner tells me there are a few more roles... but that's a good start. I'm a techie and a small business owner who loves good coffee, dark chocolate & running in the rain. And an empty nester... While … END_OF_DOCUMENT_TOKEN_TO_BE_REPLACED