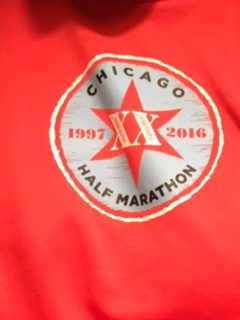 While it’s been quiet on the PDB front, we’ve been (sort of) training for the Chicago Half. Here’s my recap of the Chicago Half Marathon this past weekend. There will be a couple posts on this adventure in the Windy City, don’t worry.

Porter & I traveled with some great running friends to the Windy City for the run this past Sunday. We had set the goal back in May after running the Buffalo. You know how I love a good goal… this was it. They keep me going and focused.

At Eldests urging we sprung for the VIP package. We’re used to the WNY after parties and not every locale does it up the same way. The VIP meant we had port-a-potties, food, beverages and places to sit before and after the run. Since I look at each long run as a gift, thought it was better to go big for a little pre & post pampering.

…And line avoidance. Those port-a-pottie lines are always forever before hitting the start.

The expo and packet pickup was at Soldier Field. An expo is a great place to try the latest hydration mix – there was a cool chia drink – and to grab some running gear. It was a long walk from the subway station… my watch hit 24 miles and change on Friday. Oops…

When the (second or third) alarm went off at 4am, we got the show on the road. We don’t usually eat much before a long run so grabbed a couple bars (that were graciously provided in our swag bag), the stuff we had prepared the night before, got dressed and hailed a cab…

Because we didn’t know what to expect, we signed up for the shuttle when we registered. There were busses that ran from Millenium Park in downtown Chicago to the start/finish area beginning at 4am. Transportation around a big run can be questionable with street closings and such. It was better to rise a little early and go with the flow. It was the 20 annual Chicago Half… they’ve been doing this long enough to be a well oiled machine – or so we hoped.

The shuttle took about 30 minutes and deposited us at the start – along the lake in Jackson Park.

Things were just getting rolling so we grabbed a coffee and checked things out. The VIP provided water, coffee and bagels before… perfect.

You never know who you’ll meet at runs – we met a new friend running his first half and another running for a cause who we felt honored to share Youngest’s BMT journey – as she prepares for hers. People are placed in your life for reasons – it was a blessing to be able to share our side of the journey with this beautiful, energetic runner, physician and mom. 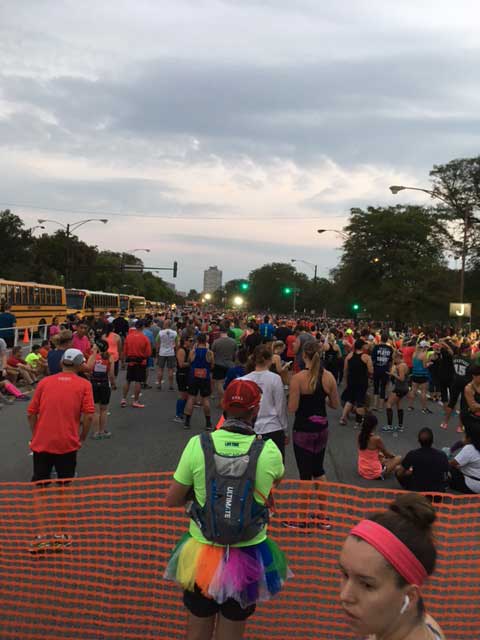 We headed over to the corrals – our first run with corrals – to wait for the gun. It was about 20 minutes and then 7 more before crossing the start. Since the weather was sunny and warm, the waiting was fine. A chance to get the electronics and everything else set.

The run was a flat run – except for a couple overpasses – along the lake with fantastic support along the course from the clap & cheer crowd, medical and the fluids folks. Every mile or so the fluids/medical/port-a-potties helped get us to the next. The out and back course was an easy run – except for that last mile. It had warmed up and the sun was shining bright… by the finish the cool towels they provided were… again… perfect. 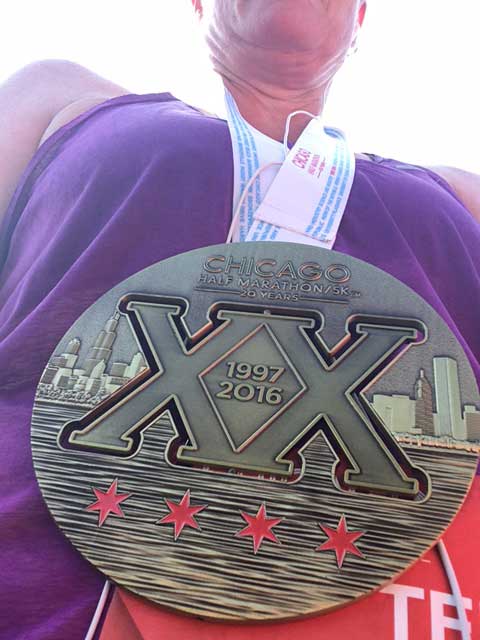 Since it was the 20th, the finishing medals were… huge and crazy.

When I reached the VIP, Porter was in line for his massage and I was ready for my water/electrolytes/Bloody Mary to get the rest of the day started. The yogurt/fruit/wraps were yummy! 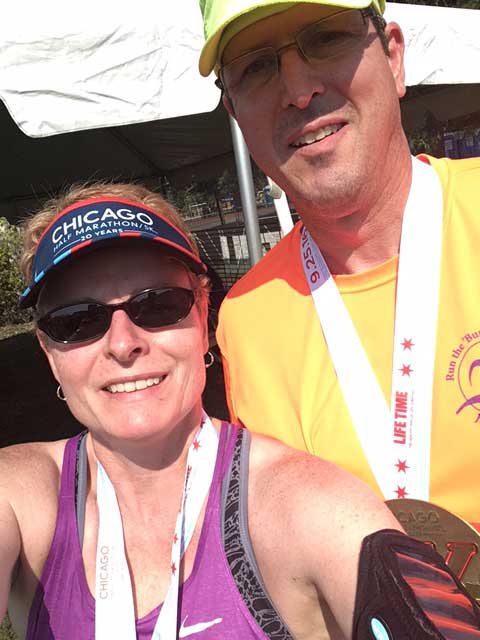 Most importantly, we did it. There were some training issues (there always are) and some travel issues that I was afraid would make the run… easy to start but not so to finish. Another one on the books, thanks Chicago.

I'm a 50-something wife, mom and business woman. My planner tells me there are a few more roles... but that's a good start. I'm a techie and a small business owner who loves good coffee, dark chocolate & running in the rain. And an empty nester... While … END_OF_DOCUMENT_TOKEN_TO_BE_REPLACED