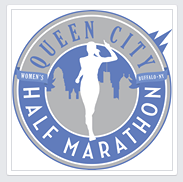 When a friend mentioned running the Queen City Half Marathon the week after Chicago, I did give it a thought but not really. She would be running 3 months after reconstruction surgery following treatment for breast cancer. Is she could run, I could run. Life is full of challenges, this was an easy choice.

The run was the first annual Queen City Half Marathon, a women’s half run around the Buffalo waterfront with an after party at the ballpark. The course was a nice run on the roads and some bike paths around Canalside, Erie Basin, downtown and the Outer Harbor.

This will be my fourth half – so while I don’t have a huge experience sampling to call upon, we try and be mindful of what we run. It actually worked out well. The run was harder than last week, my foot/toe pain started around mile 5 and the last three miles were… looong. My toenails will hurt again for a couple days too. Will have to see if I can figure that out. With the help of some new and old running friends, I finished with a better time by a couple minutes than last weekend – Yay & Thanks Ladies! Running is truly a community – my favorite part of running.
I’ll be sore for a couple days but no problem. Feels pretty good. 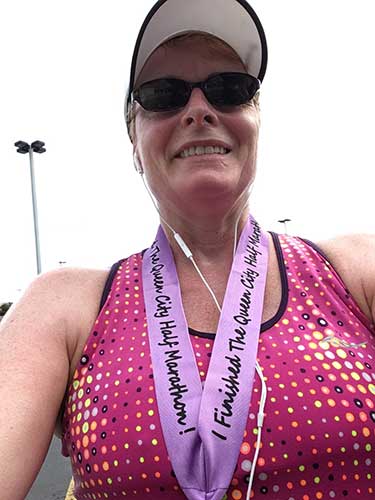 If you’re interested, here are some thoughts from the run.

What was worked for me?

The route – it was a nice run, well supported. The Buffalo Police did a nice job of managing traffic on (what turned out to be) a beautiful Sunday morning running along the waterfront. Still prime boating season… I bet there were more than a few boaters who were not particularly happy with the wait or diversion. The course was some great Buffalo spots to run. For whatever reason, we’re not as familiar with the Outer Harbor as I’d like. It was an opportunity for exploration.

There were water stops ever two or so miles. It wasn’t a really hot and humid day so that worked. One more at mile 12 would have been a good idea in my opinion.

The after party had fantastically cold water, fruit and baked goods at the finish. There was more water, wine & beer along with some hamburgers and dogs at the ballfield. The burgers were like 1/2# burgers. They were huge.

The ballfield after party was held under cover – when the rain started, we didn’t get soaked or have to disperse. Perfect.

Race swag was nice – a purplish t-shirt, a medal with a wine stopper and can cozis. I understand that bottles of wine were available upon request from the sponsor. It was too early for me for wine, but the beer was cold and refreshing.

What would I like to see different next year?

A little better communications in general. Runners were trolling up and down the street looking for the start. Possibly because they wanted to minimize road closure time, the start was set up 15 minutes before the gun. Not a problem but if they would have just told us (I did ask the folks at packet pickup and the police)… The availability of bathrooms (see below) and location of water & potties stops on the route for pre-run planning were more communication opportunities.
More support on the run. There were two port-a-potties on the route – on an out & back section of the course so we passed the same ones twice around 4.5 & 7 miles. I may be the only neurotic runner who plans my run before hand or with a bladder that needs a potty within the first 1.5-2 miles of the start of a run. I had to make alternate plans, thankfully it worked out. The difficult time was when my tummy started having problems and I wasn’t quite sure how the rest of the run was going to go around mile 8. There were no race-new & clean potties for the rest of the run. It was uncomfortable and thankfully it worked out.
There were 4 port-a-potties at the start, the line was crazy long as you could imagine. While looking for the start, we discovered there were two more actual bathrooms at the ballfields. If only we knew…

As we get more comfortable running halfs, it’s easier to sign up for something a little blind. There are some basics that I’ll continue to look at before forking over the cash. While Eldest the Uber Ultra Runner says I’m a little bit spoiled, I’ll take it. Each run is a gift and I’m good with wanting to be taken care of a bit – yes, even on a run.  There are some basic things that I’ll continue to look for before signing up – route and support then who benefits from the run, the after party and swag.

It was a great day yesterday! The best part was that my friend kicked my butt and had a great run. You go girl!!

I'm a 50-something wife, mom and business woman. My planner tells me there are a few more roles... but that's a good start. I'm a techie and a small business owner who loves good coffee, dark chocolate & running in the rain. And an empty nester... While … END_OF_DOCUMENT_TOKEN_TO_BE_REPLACED