These days running 4 miles isn’t a big deal. This morning it WAS.

Backing up a little bit… 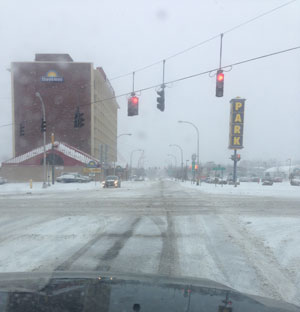 It was hard to resist the temptation to just roll over this morning. It’s been snowing here on and off for about a week. It snows in WNY. We’re tough in the snow. But… the past few winters we’ve been dryer than I can ever remember. We got a little spoiled… This year is a reality check!

What to wear? For me the challenge of running in WNY in the winter is…
how to stay warm enough that you can get through the wait before starting and the first 1/2 mile… while not overdressing so you’re overheated at the half way point which has you cold at the finish. Since it was 13 degrees at home, I added a layer and had three on top, two on the bottom. Eldest son made some recommendations when we ran the Trot on some high tech running gear, but I’m still drawing from lower tech clothes in my drawers. My top had a Cuddle Duds shirt, Adidas 1/4 zip, windbreaker from the Reindeer Run.
Bottom was a new pair of stretchy Cuddle Duds and eldest sons hand-me-down high school track pants. Throw in my favorite pink gloves, bright scarf and cap and I’m ready to run!

As much as I love to look good while running, this morning it was about finishing.

Best race swag ever are those great windbreakers from the past few Reindeer Runs. They are my go to winter run top layer.

As we drove to Whirlpool State Park in Niagara Falls Porter was assessing the situation. “The wind is coming out of the east this morning so we should have it at our backs for the second half of the run” says Porter. You can see the terror on my face in the before shot above… my reply could only be “Really… the best part will be crossing the finish line.” (Remember that the $15 entry fee had me contemplating a roll-over, stay warm snuggle in our bed morning.)

What kept me motivated to freeze my butt off?
It was a 4 mile morning… I try to run outside at least once a week, usually on Saturdays. So it could be outside with fellow runners, using my competitive side for a faster run or inside all alone on the treadmill. One way or another it was 4 miles. If only to prove to myself I could do it, we arrived at WhirlPool State Park. 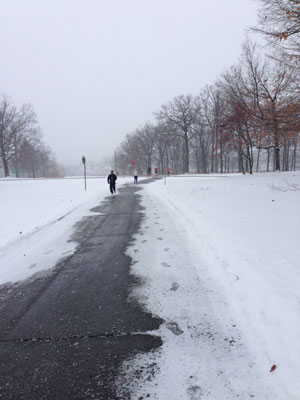 I took this warm up shot to give you an idea of the conditions. The start had been salted which melted the snow… for the first 1/2 mile or so.

About 50 of us crossed the starting line on this wintery run. Whirlpool State Park is on my list of favorite places. There are stairs and trails leading down to the Niagara River whirlpool, just down from Niagara Falls, a scenic, challenging urban hike workout. You forget that just a mile away is the bustling of Niagara Falls in one direction and Lewiston in the other. We had not run this particular race before so wanted to give it a try.

Back to the run. It’s hard to run in the snow and even harder to run when it’s frigid cold and the road surface is frozen and slippery. Each step is a balance between exerting all of your power to get a strong step and landing gingerly so you don’t slip and risk injury. My initial strategy of following others quickly shifted to taking the road less travelled, running off to the side a little. The beaten path became slushy and just caked the muck on the soles of my sneakers. The fresh coating of snow, while still a challenge to run in, seemed to be a cleaner run and less slippery.

There were a couple challenges on the route. There was a long concrete surfaced bridge with a steep incline to reach the peak of the bridge. The bridge we had anticipated, the elevation change to the finish no so much. It wasn’t easy. To clarify… it wasn’t hugely difficult but expectations are so much. After running almost 4 miles and anticipating a strong flat finish, it let me bump it up a notch to pull that last kick to the finish. The tank didn’t have as much as I had hoped.

It’s funny the details that you count on. This run had no mile markers along the route. Since it was an out and back, no big deal. But here’s where I can see a gps watch coming in handy(we gave one to eldest last xmas, just thought it was a cool toy). The only way I know to pace is distance against time, right? Next time I’ll check the route before to have some idea of where the mile markers fall. Sometimes I get caught up in the excitement of the start and go out too fast which blows the end of my run.

My original dry goal was for 10 minute miles. The conditions had me nervous. So put my head in a place to run my run with the goal to finish without injury. People passing me usually gets my competitive on but today it wasn’t about beating the clock, it was about beating the weather. 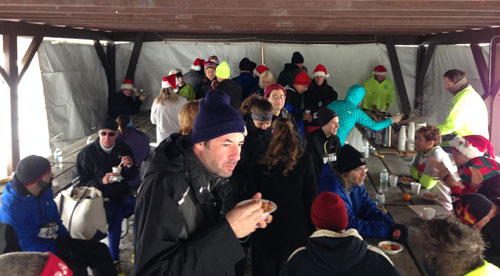 One thing we love about running in WNY is the after parties. Construction at the Discovery Center changed the race route this year. It didn’t dampen our spirits. Great job Niagara Area Habitat for Humanity… our after party was in a heated tent.

What was your challenge this weekend?

I'm a 50-something wife, mom and business woman. My planner tells me there are a few more roles... but that's a good start. I'm a techie and a small business owner who loves good coffee, dark chocolate & running in the rain. And an empty nester... While … END_OF_DOCUMENT_TOKEN_TO_BE_REPLACED