You are here: Home / Running / Hydration for the Long Runs 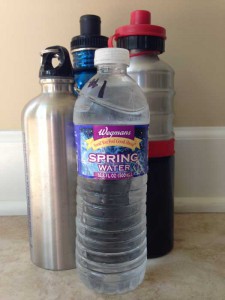 Our target of the Mighty Niagara for our first half marathon meant summer long runs.

Being my first long runs ever and Porter’s since high school (a little more than just yesterday) a couple of things concerned me. The humanity of running can be humbling.

One issue was staying hydrated once the runs went beyond 7 or 8 miles in the summer heat.

I got online and stalked Runner’s World and a few of the running blogs I love to follow.

Our town is a great place to run. I love living here – running is just one of the reasons. We have a nice bike path and some decent roads along the river that are close to home. Nice places to run. I love starting and ending a run at home. The only issue I’ve had is that we live in a more rural suburb, so there are none of those water fountains that I kept reading people referring to. Where I run there aren’t many businesses either so stopping for water wasn’t a reality. If you run early, most places… you know what I mean.

There are a couple popular options for  hydration during a long run:

The choice was to either carry water with me or drop it off before starting a run. Since it was the heat of summer and my body loves to sweat, I opted with the drop off route. Less is definitely more sometimes. I also started to have chafing issues that scared me off from adding anything more than necessary close to my body. I must say that for longer runs I would definitely invest in a Camelbak… even in the summer with my sweaty body. Wasn’t quite to that point for this training. The hydration belt is pretty popular too. None of my running friends use them (but do use a hydration backpack) and the chafing had me spooked.

I’ll digress for a bit to say the first time I try something new, my brain can only handle so much. For this first half, going with the easy answers made sense to me. There is only so much time and so many new things I can handle. My feelings will probably change once I’m an old hand at these longer distances.
Carrying a water bottle for a mile or two is fine but longer than that just wasn’t for me. It might be for you. The drop-off was my best answer. My palms sweat like mad. Holding a water bottle for too long is difficult even with a slick holder. Though having a bottle of water in your hand for the last mile when you’ve upped your mileage and have to do a little negotiating to finish crosses off one excuse to stop and may get you to the finish.

I would fill two well marked water bottles and drop them off at two spots on my 8-11 mile out and back routes. After the run, I would return to pick them up. One under the bridge (we live on an island) and one at the 3 mile point. When I added mileage it was on the other side of the 3 mile point so it was perfect for on the way back. The bridge was only another mile or so but for me it was a mind game. There were a number of times that I just kept running by, but a couple times it saved me.

The tough runs where a fair amount of negotiation took place went like this…
me: I’m so tired and just want to be done.
Me: Buck up, you have water, are not injured… you’re just tired and almost there. Buck up and keep going.
Round and round between me and Me. Remove the excuses… got me to done a couple times. On those days carrying that water bottle for the last two miles got it done.

First I would put them around guard rails. Eldest suggested to hide on the inside of the guardrail after I shared the disappointment of having one bottle “cleaned up” when I got there expecting that drink. Ohhhh… expectations are everything… that just stunk.

Eldest explained if I came home (or hijacked a port-a-potty) to pee, I didn’t need hydration. He’s probably right. But… for each of the past two summers there have been one run each where dehydration was an issue. Both were shorter runs where I didn’t hydrate enough the day before. After those experiences, better safe than sorry. On hot, humid days I always make arrangements in case I have a problem. A plan just in case. Sorry, I’m a little OCD and need to have a plan.

The other reason water was helpful to me is I’m a mouth breather. It takes concentration to remember to breathe through my nose and not my mouth (and to include my belly in the action – yoga breathing goes running). Some days on some runs at some points… it’s impossible to muster the focus. Well, you know. Getting my mouth a little wet feels really good at those times.

The real key is to hydrate over a couple days prior to your long run. How much? I’ve read and lived that you should drink half your body weight in ounces each day (non-alcohol). I’m about 150 pounds so that’s 75 oz per day. I make sure to check the color of my urine. I know that may sound funny; just part of the humanity that is running. It should be pale yellow – not apple cider dark or almost clear. If it looks like apple cider, you need to drink more &/or see your physician. If it looks close to clear you may be over-hydrating which can be serious. Everyone’s body is different, that’s what works for me. You should consult your medical professional with any questions.

Before a long run I eat a little something (toast w/peanut butter) and drink a cup of coffee and some water around an hour before heading out. Hopefully enough before to let the food settle and the liquid to work through.

Some of the other products I looked at:

Training for a half introduced me to many new aspects of running. Hydrating was one of them. For me, dropping water for the longer runs worked… Even when I did a good job of hydrating before.

Hydrating leads to another issue… potty breaks. Another topic for another day…

How do you handle hydration during a long run?

I'm a 50-something wife, mom and business woman. My planner tells me there are a few more roles... but that's a good start. I'm a techie and a small business owner who loves good coffee, dark chocolate & running in the rain. And an empty nester... While … END_OF_DOCUMENT_TOKEN_TO_BE_REPLACED