You are here: Home / Ponderings / Nik Wallenda’s Lesson to Us All 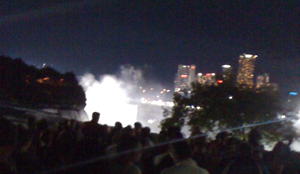 Like so many people, I poo-pooed the hupla around Nik Wallenda’s “walk” across Niagara Falls.

As it neared, my interest grew. What a lesson to us all in goal setting, persistence and focus.

Being a pretty conservative person, it started as a boondoggle. Or at least that’s what I thought. Last week as the news started to pay attention and report on the history and the man, I learned more and became interested.

So on Thursday, Porter was a little surprised with my suggestion we head to the Falls the following evening. Not out of character, because we spend a good amount of time in the Falls, living about 15 minutes away.

We parked far enough away to help us meet our walking goal for the day. As we neared downtown, it was a festival. People eating and drinking and enjoying themselves… everywhere! It was fantastic. The excitement, the anticipation, the pure fun! After making a couple stops, we actually arrived in the park(I didn’t think we’d make it into the park). The plan was originally to stay on Old Falls Blvd and watch on the big screens, BUT we walked over to the park and found ourselves a spot next to the American Falls. Met some nice people and got to see, actually see, Nick as he made is historic walk – as he achieved his goal.

After the fact, I found it to be disconcerting that he answered questions as he walked. The praying I get, the conversation was amazing. Wow. Talk about well prepared. That’s the only reason I can think that he was able to multiplex under such stress. Working on something like that!

So we were there, we were motivated, we were certainly entertained.

I'm a 50-something wife, mom and business woman. My planner tells me there are a few more roles... but that's a good start. I'm a techie and a small business owner who loves good coffee, dark chocolate & running in the rain. And an empty nester... While … END_OF_DOCUMENT_TOKEN_TO_BE_REPLACED