You are here: Home / Running / Recap – 2014 Mighty Niagara Half Marathon 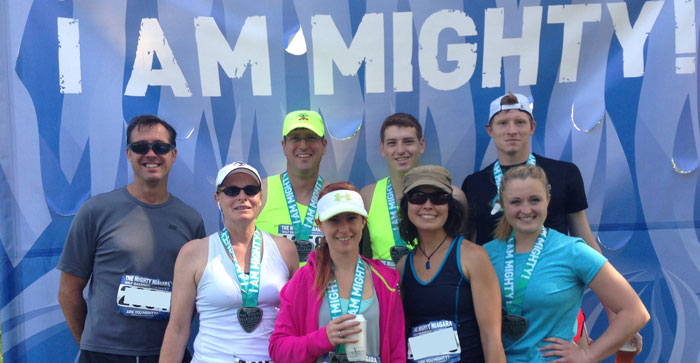 First half marathon is on the books. Here’s a short recap of the 2014 Mighty Niagara Half Marathon.

After months of training and a week of torture (OK not really, it just felt like it), the finish line was crossed in Porter, NY! WOW!

There are so many emotions that come with accomplishing a goal, many are still being processed. I learned so much about myself, the amazing human body, our complex minds and about family and friends.

After some craziness the day before… because with every event, it’s all about the people… so a celebration is required. Staying off my foot meant so many things got left on the shoulder (get that little analogy… so crafty with words am I). But we were prepped, the question was who was going to run…

I had that silly foot problem that was still nagging and had me limping and gimping around.

Porter had stepped on some glass (the hours following a long run are for recovery… and nothing else for me… completely brain dead) I had broke and thought I had cleaned up. His foot was bugging him.

Eldest is being treated for an almost stress fracture and not running. Knew convincing him not to run would be  impossible – unless we could induce a coma that is.

Youngest was so busy with school that training didn’t get his long runs quite far enough.

Here’s the thing I learned, your body can do many things – even things it shouldn’t (a story for another day) – if you want to bad enough. Ok, I knew that. Honestly, it’s the only way that most of the projects I’ve worked on have been delivered. Sheer will can be an amazing force.

While I knew that will could align electrons (honestly there have been times…), I have never really pushed my body so far outside it’s comfort zone and returned basically unscathed. Look for more posts on that…

I love, love, love having a bunch of people around. Starting the day was perfect. A house full… breakfast, coffee, hydrating and my body doing all the things it was supposed to – started exactly as I had hoped. My foot was still sore but I believed 13.1 was happening. Honestly, it was sore but had thankfully recovered to the point that I felt comfortable with my decision to start. A few laps around the house showed me being at the start line was happening!

Friends met us to head to Lewiston. I’ll tell you the story of the new friend we made another day. It was so very cool.

After finding the right port-a-potties, we were ready to drop our bags, do that pre-game Gu and head to the start. It’s funny that usually there’s a spot if you know the start area where lines are shorter. We had some help and found that wonderful row of port-a-potties that you had to know about to find. It’s like going to the end of the water stop to get your water instead of the start…

Since the day was going to be warmer than expected and sunny, hats were all the rage. It ended up being in the upper 70’s and sunny. Certainly a beautiful day, but I would have preferred a few less degrees and overcast is better for running. 1325 runners starting.

I liked that they did the national anthem at the band area, not at the head of the start. You can never hear anything because we’re never out front. Better that everyone could be a patriot.

The start was briefly up hill, with the course generally down hill. A mostly flat and scenic run made this a fun way to spend a couple of hours. My foot started tweaking in the first mile… having the good sense to ignore it, the dull ache was the least of my concerns. Getting to 13.1… that was my concern.

To express the love I felt is difficult. Our boys and “Adopted” daughter were all there to share the day. I love, love, love running with Youngest. Just the opportunity to hear his stories and spend time together is a gift. The three of us ran together until just past mile 8.

My attitude on this run was that it was a fantastic gift. Every goal has obstacles and we had our share on this route. Last weekend while hoping for the best, I couldn’t help feeling that the half was circling the drain. To be feet on the pavement was fantastic. The downside is that Youngest may run his last run with me. I was so pumped – between the adrenaline and caffeine, I was rocking. So there was much hooting and howling along the route… omg even singing. Yea, I was certainly rocking. Oh well, it makes the run fun, passes the time and puts your attention on the positive… Youngest was focused on his run and I can understand.

It was a pretty run. The lower Niagara River is steeped in history with beautiful water views and majestic old homes. We ran through Fort Niagara Park. On a hot, sunny day the tree-lined portions were a cool respite. About every mile, we were entertained with different musical experiences. It was motivating and changed things up a bit. Being able to change focus I found critical to having a good run.

There were enough groups of people cheering along the course… of course I cheered for them. How great that they gave up their time to cheer for their friends and family (and everyone else)… It was just fun.

Mile 11 had us running up an overpass crossing the Robert Moses Parkway. I was surprised to see Eldest approaching as we reached the overpass crest. Oh it was fantastic. So I got to run about two miles with my guys. Wow!

After finishing his run, Eldest circled back to finish with Porter before coming back out to meet us. Porter made a bad game-day decision to switch shoes so his run was more difficult. He had a great run and hit his target 9 min miles. Whoo Hoot!!

The finish was fantastic. A long line of cheering people. Could not have been better. A friend was along the sidelines and came out to meet us and run along the finish. Again… it’s all about the love.

Crossed the finish feeling far better than I had expected. Even Eldest commented that I was way to happy those last couple miles… trusting my training, giving my foot time to heal and having faith (even when it was so difficult) let me cross that finish line… chip time was under 2:30. So there’s that, too.

I know I can do anything.

Let the festivities begin. And we did…

I'm a 50-something wife, mom and business woman. My planner tells me there are a few more roles... but that's a good start. I'm a techie and a small business owner who loves good coffee, dark chocolate & running in the rain. And an empty nester... While … END_OF_DOCUMENT_TOKEN_TO_BE_REPLACED