Benefits. Cradle Beach Camp is a local non-profit organization whose focus is on assisting children.

Run. This is a flat run through the streets in the Willow Ridge area of Amherst. I really like the first mile, along Ellicott Creek. The Amherst police do a great job of traffic control. This year the weather had the last 3/4 mile with that slippery thin coating over the asphalt. It wasn’t bad, just enough to be mindful of. Always a possibility during colder runs.

My wakeup was when the iPhone stopped just after mile 1. “Need to cool down,” what? It was a wakeup how much it threw me. Between the feedback from the Map My Run app to the pacing I obviously rely on my music for. It was definitely a wakeup and a disappointment. It was a silent run, not bad, just not something I’d anticipated. Guess I’ll add some silent runs and work on pacing. After a little thought… I wonder if the iPhone overheated because it was in the pocket of my spiffy new jacket, not in a holder wrapped around my arm. My little happy dance when leaving my holder at home may have been premature!

Weather. The weather was nice for a January morning, around 16 degrees with a breeze. Half way through it started snowing. It made the run feel picturesque. Right, picturesque isn’t a feeling, but it is now!

Wearing: My goal this year is to not over dress. I seem to overdress for cold runs. For this run, I was sporting some new Christmas running duds and my new wireless headphones. Today I wore my new hand knit running hat, cuddle dud top, Sugoi cold short, Asics Storm Shelter Jacket, Rebok cold tights, running pants, regular running socks.

After Party. This run has a great after party. First, it’s inside. Winter runs are tough and it’s a requirement to celebrate inside after the torture outside. The after party is hosted by Classics V, a nice banquet spot. They put out such a nice spread that is wedding reception-esque. The food is always yummy… water, coffee, pop, beer, rolls, green salad, macaroni salad, vege, pasta, mashed potatoes and chicken. It is fantastic. The only thing that was different this year was the beer was Labatt’s. It’s always a wonderful after-party that they obviously spend hours coordinating. Atop the food, there are split club opportunities and a basket raffle. 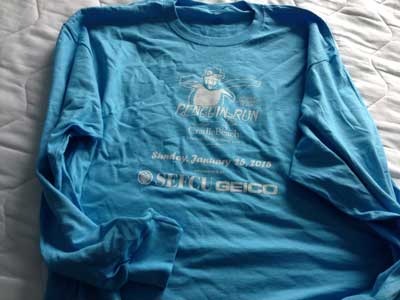 This run was hard. Not enough running, certainly not enough outside running and a threatening cold made this a hard run. Need to get outside more before the February run.

Last year we signed up for a 5K and I received a call asking to help me with fund raising. 5K seems like a short run to fund raise for, to me. We select our runs based on cause, route, after-party and swag. There are causes that are near and dear to my heart. I have a tough time wrapping my arms around fund raising atop an entry fee for a 5K. After signing up for this run, I received a letter asking for an additional donation and for fund raising. Just having a hard time wrapping my arms around that.

What did you run this past week? Thoughts on 5K fund raising?

I'm a 50-something wife, mom and business woman. My planner tells me there are a few more roles... but that's a good start. I'm a techie and a small business owner who loves good coffee, dark chocolate & running in the rain. And an empty nester... While … END_OF_DOCUMENT_TOKEN_TO_BE_REPLACED