The advantage of not running the Shamrock Run was…Nothing… Oh sorry.

It was that I got a couple great shots of the crowd at the start. Heard the final number was around 4900 runners. My guess is that there were as many runners as cheerers. This is a South Buffalo tradition.

This year was our first. Ok it was Porter’s first. I walked about a mile of the course and then probably two more trying to see Porter at different spots. My timing was off… he was smokin’ hot on this run. 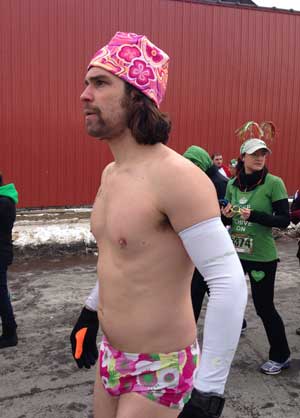 So much green in the crowd today. Check out this guy. It was a sweltering 27°, a veritable heat wave this year (this morning it’s 2°). He & a buddy were rocking the arm sleeves for warmth. Brrr…

It’s a fun run. A smaller version of the Turkey Trot. (If you’re not from WNY, the Buffalo Turkey Trot is an 8K run Thanksgiving morning with at least 12,000 of your closest running friends.)

We were thankful for the good weather. There were tailgaters, the hot dog cart… I even saw a food truck.

After a pop in the tent, we headed down the street to one of our favorite stops, McCarthy’s for some corned beef on rye. Oh and the potatoes. Boiled with the corned beef. A little slice of heaven they were… with that corned beef flavor. Yummy!

The Shamrock Run was a good 8K & a great time. It’s a little different and if you’ve never run it, be prepared. For Buffalo, it’s one of the larger runs. We were lucky to get a great on-street parking spot about a 1/2 mile from the start. It started at noon (my preference is to start earlier) but it really is an afternoon event. While you can make it just about the run, it can be much more than that. They have a big tent set up outside the community center and the beer does flow. And it’s not bad beer (yes with a brewing husband pin on the beer snob badge). They have food for sale. So the after party is a beer blast, not a fruit, water, food event. I wasn’t quite prepared for that, but probably should have been.

Which was why we headed down to Gene McCarthy’s to warm our belly. It was the grand opening of their brewery too… They did a great job of anticipating the crowd and turning their parking lot across the street into a party spot. We opted for some food (and running water) inside. It was a good choice. 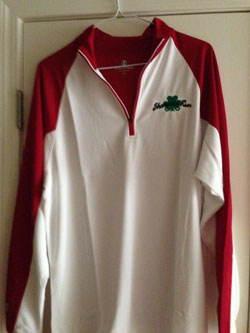 Back to the run… The swag was nice. They do something neat and different each year. This year it was a 1/4 zip pullover. Wondered why it wasn’t green… but March is my month of favorite color green. Shouldn’t everything be green?

Porter had a great race. His self time was 40:42, quite impressive!

So many races use chips for timing today, which is awesome and it must be much easier for the organizers. We wonder why it seems that most only use the finish chip time, even when they have a start mat. When we self time, many runs finish time is off by close to what it took to make it to the start mat. At some point I’ll ask someone. It doesn’t matter, just something we’ve been pondering.

What did you run this weekend?

I'm a 50-something wife, mom and business woman. My planner tells me there are a few more roles... but that's a good start. I'm a techie and a small business owner who loves good coffee, dark chocolate & running in the rain. And an empty nester... While … END_OF_DOCUMENT_TOKEN_TO_BE_REPLACED