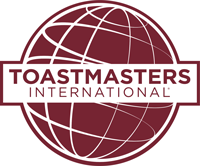 Last night was my first Toastmaster meeting as club President.

I am definitely my harshest critic. My nerves had a hold of me at the start, then I remembered the sage advice of a trainer… “Fake It Till you Make it.” So that’s what I did, it had me standing tall.

One concern that I had going in was that I had been to enough different club meetings, each of which are subtly different that I can’t always tell which version applies to which club. Relying on the general agenda on the podium, I called the meeting to order.

The attendance that night was… a little low. Of course… that’s the night that we have four visitors. And we are () focusing on membership growth.

As president, I felt the need to take on another role at the last minute that needed to be filled, Tabletopics Master. So my face was front & center for opening, Tabletopics, speech 1 and closing. Not a great way present the club to prospective new members.

Well… the meeting started on time & finished early, all roles were filled & executed and we had a great Toastmaster.

Here’s what I’ll do differently for next meeting…

Some things to think about…

So I’m… Standing Tall and looking forward to the next meeting.

I'm a 50-something wife, mom and business woman. My planner tells me there are a few more roles... but that's a good start. I'm a techie and a small business owner who loves good coffee, dark chocolate & running in the rain. And an empty nester... While … END_OF_DOCUMENT_TOKEN_TO_BE_REPLACED