We spent part of this past Labor Day kayaking the Buffalo River. It was a beautiful day, maybe on the warm and humid side… but for September 1st in Western New York you’ll hear no complaints here.

I’ve been wanting to kayak the Buffalo River since we started pondering buying kayaks. Not because it’s a beautifully scenic paddle, rather because it’s a historic paddle. This route shows some of what Buffalo used to be and I’m happy to say what it’s becoming again.

If you live or have spent any time in Buffalo, NY you know that we’ve had an inferiority complex probably since just after our hayday at the turn of the century. It’s been impossible to maintain that level of economic success and we’ve felt it. But…

I love living here. For so many different reasons… today we’ll talk about paddling.

We tried to kayak in Cleveland after dropping off Youngest at Law School last month. We take our waterways for granted sometimes. It was more work than I expected and we ended up at one of my favorite places… Presque Isle in Erie, PA.

Our trip on the Buffalo River started at the park at the foot of Hamburg Street, Mutual Riverfront Park. Coincidentally, that is a block from one of our favorite hangouts, Gene McCarthy’s. We knew where our late lunch would be!

I never realized how much the Buffalo River winds… it seems much longer as you’re paddling!

We passed the plethora of grain mills. We must have been the center of grain around the turn of the century. We were…  Actually we were the center of many things! I’m such a nerd and found myself thinking a little about the impact of innovations such as just-in-time manufacturing. I know, I know… But it was pretty impressive. If you could come up with an economic repurposing of even half of the grain mills, Buffalo would be your oyster…

Our guidance was to paddle one way half as far as you can paddle. Since we wanted to have some energy left for the rest of the day, we paddled for about an hour and turned around. 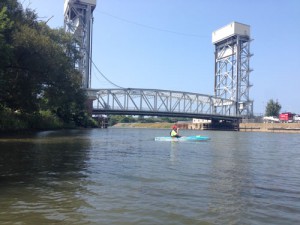 We reached the newer South Park bridge before turning around. The trip back was a little breezier but took a little less time.

There were a couple power boats which I was thankful they respected the no wake rule. We encountered one Jet Ski that didn’t. He came closer than I would like much faster than appropriate. Yikes!! Sitting in that little kayak makes you vulnerable.

The park where we launched, Mutual Riverfront Park, has a nice, new and modern launch. Getting in and out was quick and easy. The hardest part of kayaking is loading the car with the kayaks. It’s not bad… mostly because Porter does the heavy lifting (literally)… and goes quick. I was surprised that there weren’t rest rooms but the port-a-potties did the job. [Update – it looks like they do have rest rooms, I just didn’t make it that far or they weren’t open.]

Afterwards we enjoyed lunch and a couple craft beers from Gene McCarthy’s (home of Old First Ward brewery). When you’re in the area, stop in.

We’ve got a couple more Buffalo River kayaks planned. One heading out to explore the Naval & Serviceman’s Park and then in the opposite direction to head out a bit further.

It was a great day of paddling in WNY!

I'm a 50-something wife, mom and business woman. My planner tells me there are a few more roles... but that's a good start. I'm a techie and a small business owner who loves good coffee, dark chocolate & running in the rain. And an empty nester... While … END_OF_DOCUMENT_TOKEN_TO_BE_REPLACED