You are here: Home / Empty Nest / Our Very Empty Nest 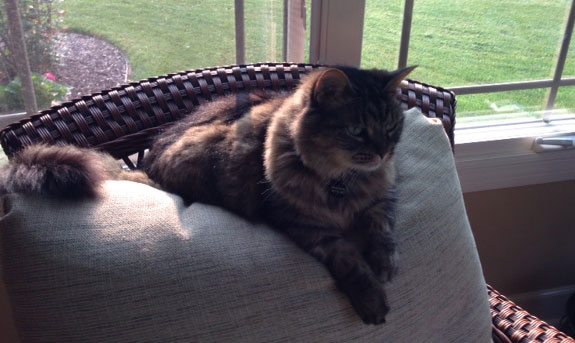 We have a very empty nest these days….

Besides being busy with a new client and some new volunteering, I did a very stupid thing. Something that will haunt me for some time. While it was not intentional, it was a crazy sequence of events that has unfortunately, ended badly.

In 2008 we adopted Sweetie, the cat of a client family that we were so lucky to care for. We knew that Sweetie was on (at least) her third home, maybe at the first there was some abuse and that she was 5-7 years old. I had spent about a year working with the family and grew to love Sweetie. We had lost our dog and were trying to decide what to do on the pet front. It seems like I’ve always had a pet – growing up then with my own family. Cats, dogs, birds, gerbils a little of each… my life was (mostly) filled with pets. Porter wasn’t thrilled with the idea of a cat but he acquiesced (admittedly without much choice).

Over the past six years, Sweetie has learned to trust and I think she had a great life. She went from isolated and defensive to more open and as loving as I think she could be. She actually came and had worked up to be a pretty social cat. We enjoyed this version of Sweetie. A little bit of play, a little bit of finicky. We had worked to enough trust that she would (finally) let me brush her. Not sure why that was such a big deal, but it was.

In our house, Sweetie was an indoor cat. Our screen door shows that she so wanted to be an outdoor cat. In our client’s home, she would sneak out and never quite learned to come when called. We have a vole & mouse problem around our house so I’ve toyed with letting her out. This spring I bit the bullet, started treating her for critters and would let her out if we were going to be home.

You can probably see where this is headed… She got out the front door as I went to water the plants. I got her back in, but she really wanted to go back out. When she got out again in the back, since we were going to be home, I didn’t think much of it. Sunday was a long run day for me. I was wiped out afterward. We hung out and ended up making it a very early movie night following some after dinner hot tubbing. Sweetie showed up and I almost got her in, but she didn’t want to and took off. It was what I’d like to call a series of unfortunate events… the book series our boys read in grammar school. I fell asleep at about 9:30 and she wasn’t in yet.

We awoke in the morning to a vole outside the door and no Sweetie to be found. After calling and putting out treats, no Sweetie.

This past month, Sweetie had started doing some strange things. Almost like she had kitty dementia. I just figured kitty old age was settling in. Yes, I’m rationalizing. I can also say we gave her a good life, etc. It doesn’t make it any better, well it kind of does. I still expect her to come running when we come home like she had started doing. To hear the jingle of the bell on her collar.

Our empty nest is emptier than ever now.

I'm a 50-something wife, mom and business woman. My planner tells me there are a few more roles... but that's a good start. I'm a techie and a small business owner who loves good coffee, dark chocolate & running in the rain. And an empty nester... While … END_OF_DOCUMENT_TOKEN_TO_BE_REPLACED

Copyright © 2020 PolkaDot Butterfly. All Rights Reserved. You are free to retain any and all content here for personal use, but need permission to use it anywhere else. Feel free to quote excerpts of any post with a link back to the original piece. Contact PolkaDot Butterfly for information on syndicating content or photos.
We use cookies to ensure that we give you the best experience on our website. If you continue to use this site we will assume that you are happy with it.Ok