You are here: Home / Empty Nest / Living His Dream 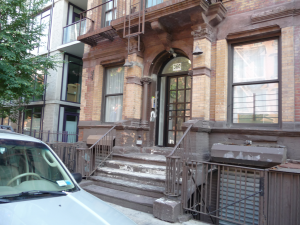 Well the adventure continues! We moved Eldest into his first apartment the other day. His roommate, a great guy he went to school with, had moved in the day before.

I have to admit, this went so much better than expected. Not that I expected it to go bad, just a little emotional. Probably because he’s been inching toward this for the past four years of school, he is READY. I have little fear that he’s not ready for this next adventure. What a comforting feeling. Or maybe it’s just that I’m ready for his next step :). It can be like that sometimes.

The apartment is far nicer than I had expected. It is beautiful compared to my first apartment. Well, guess times have changed. While it is tiny, it’s in a great location, has been recently updated, is lacking just enough of the amenities to promote appreciation and is theirs. I do remember that feeling… SWEET!

So we did what we could, wished him good luck in getting settled and starting the new job and headed for home. Just a few tears, but no big deal. Your kids bring out emotions that you never expect, OK maybe just me… but I don’t think so. He’s living his dream and it makes my heart swell. So glad we could help get him settled and spend a little time before the crazy hours start. So thankful every day that he works so hard and is living his dream.

Though being a parent never ends, there are times that are more… intense, focused. Like so many things in life. I think I’ll enjoy this time of (hopefully) less intense, less focused, more fun parenting… I think it’s called becoming friends.

I'm a 50-something wife, mom and business woman. My planner tells me there are a few more roles... but that's a good start. I'm a techie and a small business owner who loves good coffee, dark chocolate & running in the rain. And an empty nester... While … END_OF_DOCUMENT_TOKEN_TO_BE_REPLACED