You are here: Home / Empty Nest / Such a Gift 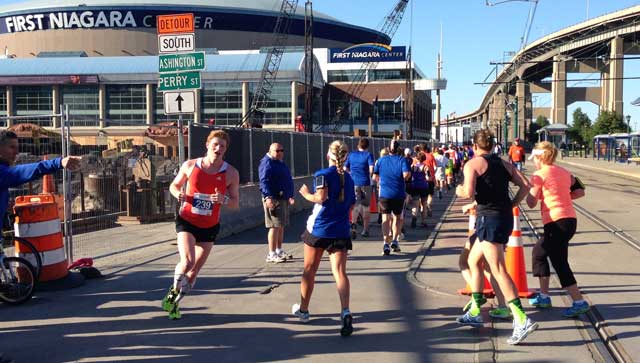 As a parent, one of my greatest joys is to see my children strive for and achieve their goals.

The strive for is (to me) the really important part. Setting a goal, making a plan and seeing it through. Achieving is relative and dependent on so many factors. The continual striving is what lets us grow and learn.

But(truth be told)… it is amazing to be around for the achievement!!

Our oldest son starting running out of the womb. He was fiercely strong willed and independent from the start. Ha… we had him propped in a walker at 3 months because he just wanted to be going… and unbelievably did.

Around middle school, he actually joined the school running club and has been running ever since.

Since starting his first job, our time together is rare and cherished. When he announced that he would be entering our local marathon, we were elated. The planning began… lets have the most fun in watching him run his second marathon. For us it was about spending time together and seeing him achieve another goal.

The weeks before had been busy at work, not the time to prep as he would have liked. The local marathon is a cash prize so there are usually more than a couple top runners & clubs who make the trip. We were hoping for a good finish, with his body not too badly beat. I think he was hoping to not disappoint the cheering squad.

It was a perfect day for a long run. The start was strong, the course scenic with a little elevation, but not much. We had the family cheering sections at spots along the course interspersed with friends and old high school running buddies. The replenishment stations pre-arranged.

At each point he was looking good, looking strong.

Coming into the last mile we hadn’t seen him since the 1/2 way point. There was another runner wearing the same color shirt who had been running ahead of him. It was a little embarrassing to be hooting and howling for my son only to find it was the other runner at the 4 mile point!

At mile 25 the fourth runner approaching was in orange, could it possibly be him? Seriously? In fourth place in his second marathon? I never imagined that it would be my son, but it really looked like him. Same body, same gait.

So some general hooting for whoever it was. At that point they’d been running for close to 2.5 hours. Whoever it was would appreciate the support!

Oh my gosh, it really couldn’t be my son. This strong, lean, obviously well trained runner approaching… in fourth place, could it?

There are few things in life better than seeing your son exceed his expectations.

I'm a 50-something wife, mom and business woman. My planner tells me there are a few more roles... but that's a good start. I'm a techie and a small business owner who loves good coffee, dark chocolate & running in the rain. And an empty nester... While … END_OF_DOCUMENT_TOKEN_TO_BE_REPLACED